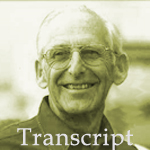 Edited & Condensed
from a talk by Martin Exeter
« December 1986 »

The experience of cosmic identity has been lost, one might say, because human beings fell asleep. They exist at a subconscious level where they don’t belong, and they experience all sorts of traumatic dreams in that unconscious condition. It isn’t a matter, in human identity, of trying to validate it, because it’s invalid; it can’t be validated. It is a matter of letting it pass away. And we are aware that in our experience of dreaming, in the ordinary course of events, the way to dispel the dream is to wake up. It isn’t a matter of staying in the dream and trying to work out all the ramifications of the dream. How would we ever do that? Yet that’s what human beings try to do. It’s impossible. There is no answer, no solution in the dream state. Wake up! That is the point. And the waking up is to cosmic identity.

So, yielding to the movement of the rhythms, the cosmic rhythms that are present we begin to discover that they are present…. So we come, open, yielded, to receive a new awareness as being a part of an immense whole. If we have any individual meaning it is based in the fact that we are functioning and operating within that immense whole, that immense cosmic whole. There is our meaning. There is no meaning or anything outside of that, and human beings individually all discover that sooner or later…

…Identity is. I am. And this may be accepted in its natural character and rhythms into expression in momentary living. And so the affairs of the human identity in which we all play a certain part may be permeated by the cosmic rhythms and the cosmic purposes. What effect does that have? It raises up what is capable of being raised up, it dissolves what is not capable of being raised up. We have been aware of these two aspects of the creative process: integration and disintegration. The effect of the creative process emerges in this way. We are concerned with that emergence within the range of human affairs. To be in the range of human affairs it must emerge through human beings. Nothing gets into human affairs without coming through human beings.

As cosmic identity and alignment, attunement, with cosmic rhythms and purposes is restored, then whatever we do in our daily living will be permeated by this cosmic expression, the expression of the creative process brought to focus now through human beings. This is the purpose of every person: to bring this to focus, to let planet Earth and all things related to the planet be brought specifically and directly into the focus of the creative process by reason of human beings, men and women, in right identity. This is the only reason for the continued existence of humanity.